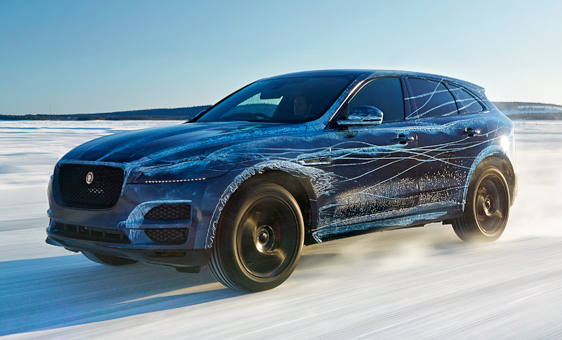 The flag’s gone down on the 2015 Frankfurt Motor Show and it’s already off to a thrilling start. As specialists in luxury car transport, we have been counting down the days – but even if you’re not a huge petrol-head, the sheer scale of Frankfurt will make you sit up in your driving seat. With an array of sensational new cars and thrilling concepts, it’s an epic experience in its own right – and here are some of the highlights so far.

Frankfurt is a place for motor-engineering finesse. The German manufacturers are on home turf with no reservations about reminding their rivals, and their huge stands and flashy exhibits are real head-turners. Year-by-year competition becomes fiercer, with every company in attendance ready to take it up a gear.

Jaguar F-Pace Serves Up the Glamour

One such name that did not disappoint was Jaguar, with the new F-Pace. Jaguar debuted their new SUV in a spectacular launch which saw stunt driver Terry Grant break the world loop-the-loop record on the Frankfurt racecourse. After months of teaser images and spy pictures, the British marque certainly served up the glamour in the F-Pace’s breath-taking arrival, introducing an SUV that looks imposing and sporty, with a supercharged V6 that sounds the part too.

And the glamour didn’t stop there. It’s been revealed at Frankfurt that the Jaguar C-X75, the Range Rover Sport SVR and the Land Rover Defender will all feature in the new James Bond film, Spectre. Managing Director of Jaguar Land Rover Special Operations, John Edwards, said: “Jaguar Land Rover featuring in one of the most celebrated film franchises in the world once again is a proud moment for us. It’s an incredible opportunity to showcase production and concept cars alike and we look forward to continuing this relationship well into the future.”

The Future of Mercedes with the IAA

While the Brits did us proud, Frankfurt reminded us of one thing; nobody puts Mercedes in the corner. The German manufacturer shocked the show with its ‘Intelligent Aerodynamic Automobile’: a dramatic four-door coupe concept with a world-best aerodynamics rating. The IAA Concept is powered by a 274bhp petrol-electric plug-in powertrain that propels it to a 155mph top speed. Although the over-exaggerated features won’t actually make it to future road cars, the brand is shedding light upon the innovative future of Mercedes car designs.

As specialists in luxury car transport, its motor shows like Frankfurt that give us an insight into the cars of the future – the prestige cars we will be delivering worldwide in our modern fleet of enclosed transporters. For more information about our services, contact us here. The show’s not over yet, so be sure to check back for more exciting news.