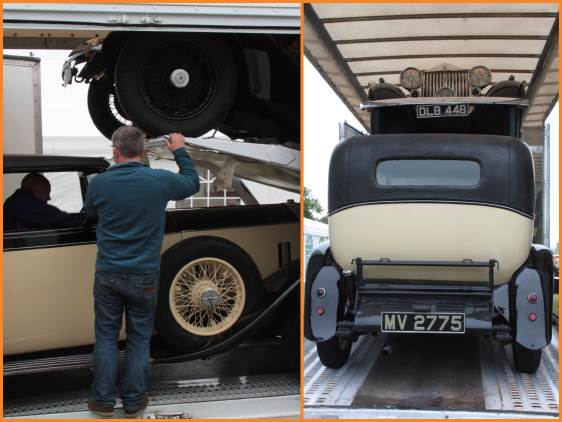 Ontime Automotive recently served as the car transportation partner for The Real Car Co at the RREC Annual Rally for the third year.

This time around, the three-day event took place at Burghley House in Stamford, having moved on from its 2013-14 home at Rockingham Castle, and Ontime were on hand to make sure The Real Car Co’s fleet were all in place ahead of the start of the weekend’s festivities.

As the provider of car transportation services to The Real Car Co, Ontime had to transport around 20 classic Rolls-Royces and Bentleys to the company’s stand, with many coming from North Wales or via boat from the USA and directly from the docks to the rally.

Ontime Automotive picked up 16 cars from The Real Car Co in Bethesda and had them in Stamford by 11am on Friday June 19th, before returning them to base after the weekend – with the exception of those which had been sold and were taken direct to their new owner instead.

While Ontime are experienced at taking cars all over the continent and beyond, The Real Car Co’s requirements were a little more specific. That is because the RREC is the Rolls-Royce and Bentley Enthusiasts’ Club, and many of the vehicles taking part in the rally are not just classic cars, but are truly unique thanks to having been coachbuilt to the original owner’s specifications.

Vehicles range from the early 20th century right through to the mid-1980s, and need careful handling, being safely secured in place during transport, but also winched on to the transporter, rather than being driven.

The RREC Annual Rally is a crucial showcase opportunity for The Real Car Co, as many customers are not able to make the journey to North Wales to view the vehicles in person – making it one of the few chances for the vehicles to travel to them instead, and heightening the importance of everything arriving in perfect condition.

For the existing owners, it is also an opportunity to enter their cars into the show itself, and The Real Car Co are always delighted when, as they have done several times in the past, one of their owners’ cars wins best in class.

The Real Car Co said: “We have every intention of using Ontime Automotive, not just during the year for our UK and Continental Car Transport requirements, but also for the car transport Europe and UK buyers alike need, in order to know their new pride and joy will arrive in exactly the condition in which it was purchased.