Highlights of the Classic Motor Show 2017 at the NEC Birmingham 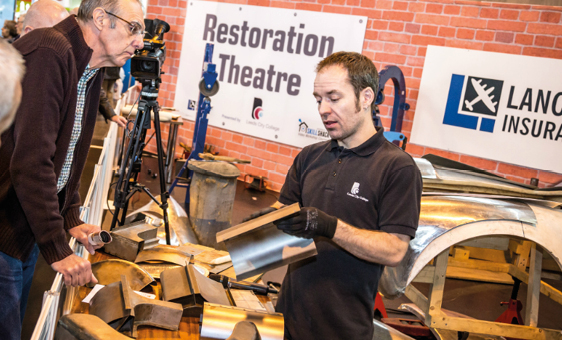 The 2017 Classic Motor Show took place this weekend at the NEC in Birmingham, with 240 motoring clubs represented among the exhibitors and a theme of ‘Family Ties’ looking at the bonds between drivers and their cars, and between the different cars made by each manufacturer.

Acting show director, Lee Masters, explained: “The classic motoring community is one huge family, but so is the motoring industry. Manufacturers create various models which are in families, with one model billed as the sister car to another.

“Plus, there’s those cars that have been passed down through families, from generation to generation; the motor your dad taught you to drive in, or the family saloon that took you on your first holiday.”

Classic cars fall into both of these categories, while they also help to create a further bond between the members of each classic car club, each with their own personal reason why they love the particular make or model.

The birth of the Beatles

You might be wondering what the Beatles have to do with a Classic Motor Show in 2017, but in fact it’s 60 years since John Lennon and Paul McCartney first met during a performance by Lennon and The Quarrymen on the back of a lorry.

For the anniversary, the Federation of British Historic Vehicle Clubs found the original line-up of The Quarrymen still playing together, and arranged a special performance on the back of a 1937 AEC Matador lorry.

The group – comprising Len Garry on vocals and guitar, John Duff Lowe on piano, Chas Newby on bass, Rod Davis on guitar and banjo, and Colin Hanton on drums – played two 30-minute sets from the back of the vintage lorry.

The Restoration Theatre is the show’s longest-running feature and gave tinkerers the chance to meet with the experts and see in-person skills demonstrations.

Restoration specialists from Gilbert-Michaelson shared their expertise on all things from panel repairs and bodywork, to lead loading and classic car renovation.

Visitors were able to watch as part of a group audience or stick around to ask questions one-on-one to co-founder, Mike Coman, and his team – a rare opportunity that has proved popular each time the Restoration Theatre has been held at the Classic Motor Show.

While the Restoration Theatre was the setting for demonstrations, over at the Practical Classics Challenge the work was all part of an attempt with a specific outcome – to restore a classic car within three days.

The Challenge has taken place in previous years too, with vehicles ranging from a Triumph Spitfire in 2011 to a 1949 Morris Minor Lowlight in 2016.

And for 2017 the Practical Classics team got their hands on an unusual and iconic car to restore for the Classic Motor Show – a car dubbed the ‘Mr Bean Mini’ and once owned by Rowan Atkinson’s son.

With over 2,500 classic cars and motorbikes in an area the size of 12 football pitches, there was plenty of motoring heritage on show from the past 100 years and more – a true celebration of the automotive industry.