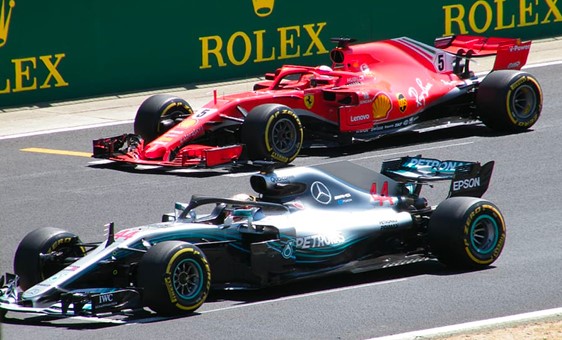 Formula 1 motor racing returned to Silverstone in explosive fashion in August as the sport’s redrafted calendar reached its fourth and fifth rounds.

Two races were held on consecutive weekends – the 2020 British Grand Prix on August 2nd and the 70th Anniversary Grand Prix, also at Silverstone on August 9th.

With the same circuit hosting both events, efforts were made to ensure the teams’ strategy for each race would be different, including by offering a different selection of tyre compounds each week.

For the British Grand Prix, Pirelli supplied C1, C2 and C3 compounds, while a week later at the anniversary race, the teams had a choice of C2, C3 and C4.

The choice of tyres proved pivotal to the events and outcome of the August 2nd race. On lap 12, Daniil Kvyat’s right rear tyre failed, he crashed into the barriers and the safety car was deployed.

Many of the drivers took the opportunity for a pit stop and tyre change, leaving Lewis Hamilton, Valtteri Bottas and Max Verstappen in first, second and third places respectively, all on fresh tyres.

As the race neared its final laps, Bottas reported visibility problems due to vibration in his vehicle, which can occur due to uneven wear on the tyres.

Three laps from the end, his front-left tyre delaminated, ultimately putting Bottas out of the race and leaving Hamilton well ahead of Verstappen, who in turn was well ahead of Charles Leclerc.

With little chance of either catching Hamilton or being passed by Leclerc, the now-second place Verstappen decided to have an attempt at setting the fastest lap, in order to gain an extra bonus point in the championship.

He stopped to change into fresh tyres and rejoined the race, still in second place. Then, on turn eight of the final lap, Hamilton’s front-left tyre also failed.

The Brit completed the lap on three tyres with Verstappen rapidly closing the gap from over 30 seconds to come within six seconds of taking the win – but it was Hamilton’s injured Mercedes that crossed the line first.

Pirelli analysed the events and blamed a combination of factors including a significantly faster race pace than in 2019, along with the 40-lap stint most teams ran on their final set of tyres after bringing forward their pit stop to coincide with the second safety car.

A week later, the softer tyre compounds C2, C3 and C4 were still used, although Pirelli recommended higher tyre pressures to reduce stress on their construction during the race.

This time out, Verstappen was able to go one better, completing the same 52 laps more than eight minutes faster than Hamilton had the week before to take victory, with Hamilton pushed down the podium to second place in the 70th Anniversary Grand Prix.

Save your tyres for the track

Following the restart of motor racing worldwide, Silverstone has a calendar of upcoming events including a triple-header round of the Bennetts British Superbikes Championship and support races to be held behind closed doors.

The circuit has also pledged to give thousands of tickets to the 2021 British Grand Prix to NHS employees and other key workers as a thank you for the work they have done in recent months.

If you are getting back to racing or exhibiting your vehicle, make sure you preserve its tyres to prevent disastrous blowouts en route.

Ontime’s sports car transporters can get you there without the wear and tear, so you can be confident of spending more time on the track, and less on the roadside awaiting rescue.