We’ve Got the Hots for Honda’s New Supercar: NSX 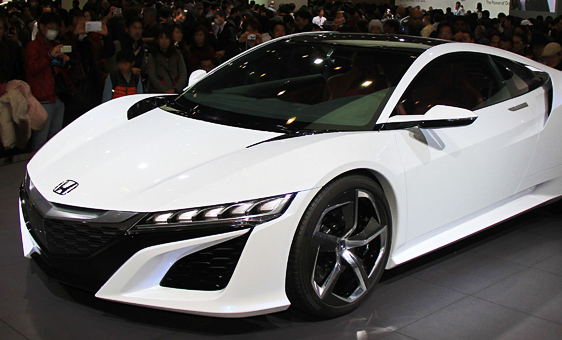 With its turbocharged V6 engine and sleek, smooth lines, the new Honda NSX achieves the perfect balance of form and function. This week we’re lusting after it (if you love cars, then come and join us) and today we’ll tell you why…

Honda’s super-sports icon has been reborn; this time around, we’ve got a ground-breaking hybrid on our hands. But eco-warriors need not get too excited. Whilst the NSX is a hybrid, you can’t plug it in – and don’t expect it to go very far on electric power alone. The motors are there to boost performance and offer modest improvements to fuel-economy.

It’s what’s inside that counts

No, what’s really exciting is what’s under the shiny monochrome exterior. Behind the cabin you’ll find the low-slung, 3.5-litre V6 petrol engine, with turbochargers sitting outside the vee so that the car’s centre of gravity is kept nice and low.

The souped-up engine revs to 7500rpm and produces peaks of 500bhp and 406lb ft. Fixed to the V6 is a 47bhp electric motor, and behind that a nine-speed dual-clutch automatic gearbox, all of which drive the rear wheels. Thanks to its super lightweight aluminium chassis, you’ve got a super-sports car that’s capable of 3.3sec from rest to 60mph.

Looks-wise, it’s impressive and strikingly similar to the Audi R8. The styling is sharp, and the car wears its shiny black plastic and chrome with no apology. Beneath its shapely body, which is also part aluminium, lies a mixed-material spaceframe. There are also carbon fibre core floor panels that feature as part of its design.

What’ll it cost me?

Its price tag (upwards of an eyewatering £130,000) puts it right into the firing line of German rivals like the aforemention Audi R8 and Porsche 911 Turbo, but around £30k more than the petrol-electric BMW i8. Bargain!

Only the best service can do justice to deliveries of this awesome vehicle, which is why Ontime Automotive has been invited to tender for UK and European deliveries. From Zeebrugge in Belgium or Avonmouth in the UK.

This sports hybrid has been described as delivering ‘an electrifying performance’ – and that’s the kind of service Team Ontime is expecting to provide.

To find out more about our covered car transport service, get in touch with the team today.