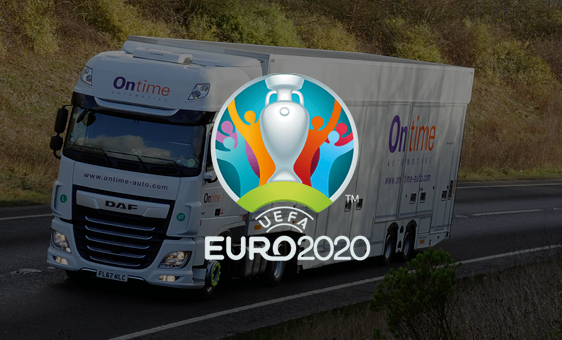 In 2018 we provided our covered car transporter services to football fans as they made the pilgrimage east across Europe for the World Cup in Russia.

With some of the host cities located almost 3,000 miles from London, it was quite a journey, but thanks to a shake-up of the format for the European Championships next year, it should be much easier to transport a car to Euro 2020 host cities.

That’s because back in 2012, when much of Europe was in a deep recession, UEFA decided to spread the financial cost of hosting the event by choosing 12 host cities in 12 different countries across the continent.

It was described as a one-off decision, not only because of the economic situation at the time, but also to celebrate 60 years of the competition.

London and Glasgow (representing England and Scotland, rather than the UK) are two of the host cities, and Dublin is a third.

Over on the continent itself, host cities include Amsterdam, Baku, Bilbao, Bucharest, Budapest, Copenhagen, Munich, Rome and Saint Petersburg – which also hosted matches in the 2018 World Cup.

If you want to transport a car to Euro 2020, Ontime can help. We have years of experience moving cars across the continent and repatriating cars back to the UK following a breakdown elsewhere in Europe.

By the time Euro 2020 starts on June 12th 2020, it seems increasingly likely that the UK will no longer be an EU member state.

Ontime will work hard during any transition period to ensure we can continue to offer car transport services in Europe, including across the land border between Northern Ireland and the Republic of Ireland.

Of course with multiple host cities within the UK, we can also transport cars to London from Glasgow and vice versa if you just want to attend matches that take place in Britain.

The road to Wembley

Once again, London is set to host the final of a major football tournament. The last time the European Championships final was held in the UK capital was in 1996 at the old Wembley Stadium.

In 2020, the new Wembley Stadium will have the largest capacity of any of the host venues, and has therefore been chosen as the location for both of the semi-finals and the final.

To attend, you’ll need to be in London on Tuesday July 7th and Wednesday July 8th 2020 for the semis, and Sunday July 12th for the final.

It’s a little closer to home than the 2018 World Cup Final was, which took place in Moscow nearly 1,800 miles away.

Whether you’re planning to stay in the UK throughout Euro 2020 or you intend to travel to some of the host cities on the continent, Ontime Automotive can make sure your car is there for you during your trip.

And if you’ll be heading back to the UK for the semis or the final, we can repatriate your car from Europe to the UK and have it back home for you as the championship draws to a close.