Top 5 cars your dad would love 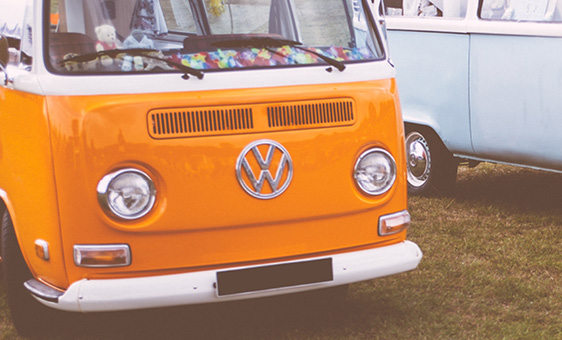 Dads and their cars are a match made in heaven, and many men of all ages are locked in a love affair with their dream vehicle – so with Father’s Day coming on June 18th, we take a look at five of the cars that are perennial favourites with dads everywhere.

The VW Camper Van – officially named the Volkswagen Type 2 – entered production in late 1949 and has been rolling off the factory lines ever since.

It is often seen as an icon of the 1960s and 70s, and much loved by surfers and hippies, but there are dads all around the world who would love to get their hands on a Type 2 and take their family on a road trip.

For dads with an interest in major film franchises, you’d be hard pushed to beat an Aston Martin as their dream car, thanks to the brand’s prominent role in recent James Bond films.

The collaboration between Aston Martin and James Bond dates back to the third film in the series, Goldfinger, in which James drove the Aston Martin DB5; more recently, the V12 Vanquish starred in Die Another Day, while the DB10 was developed especially to appear in Spectre.

All of this adds up to a car that many present-day dads have loved since their childhood dreams of being an international super spy, and would equally delight in being seen as a Bond-like character by their kids.

Family cars often suffer in environmental performance – they might carry extra weight due to having more than five seats, a lack of aerodynamics due to a bulky boot space, or just a gas-guzzling engine to carry all the kids’ essentials.

But eco-friendly dads still have some choices that will help to save the Earth, including plug-in and hybrid models of the Toyota Prius.

It’s a practical runabout for the school run, with good aerodynamics and low fuel consumption and emissions, even if you opt for the hybrid version rather than the fully electric plug-in.

The E-Type Jaguar was the icon of a generation between 1961 and 1975, and even Enzo Ferrari reputedly thought it was the most beautiful car ever produced.

Despite the two-seater format that usually springs to mind when discussing the E-Type, there was also a four-seater version on a longer wheelbase, making this a surprisingly family-friendly option.

The 2+2 seat format also featured in the Jaguar XJS in 1976-96 and the XK in 1997-2015, providing a seamless history of four-seater Jaguar sports cars, any one of which would give a deserving dad a driving experience to remember.

The Land Rover Defender is as iconic as the E-Type Jag in some circles, and still an excellent choice when embarking on an expedition.

With second-row cab seats, there’s room for the kids, although many dads will relish the chance to take a Defender out across the fields for a solo adventure.

Although the Defender may be out of production, the Land Rover Discovery is proving a great substitute for family-oriented dads in the present day who want to transport their whole household in style and comfort.