Three cars that could make it to the North Pole 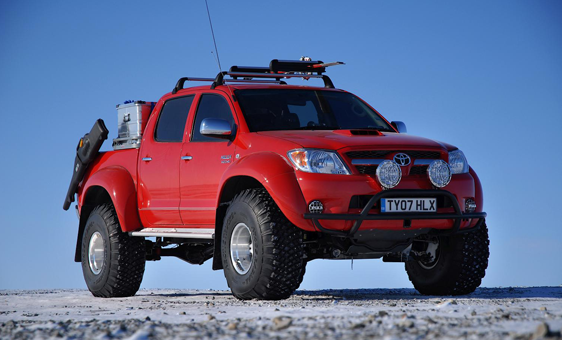 The North Pole was discovered on April 6th 1898 and remains an elusive and ambitious goal for many would-be explorers, especially those who try to complete the journey across the Arctic ice sheet on foot.

It’s no surprise that it’s only a decade since the first successful car journey to the North Pole – which was of course part of the 2007 Top Gear Polar Special.

Jeremy Clarkson and James May drove to the magnetic North Pole in a convoy of three vehicles, including a Toyota Hilux.

The modified Toyota Hilux that got to within a mile of the magnetic position of the North Pole in 2007 has gone on tour in the years since as a testament to motoring achievement.

It was kitted up for the Polar expedition by an Icelandic company, complete with 38-inch tyres designed to handle the Arctic tundra.

Far from being a simple smooth ice field, the Arctic has deep snow drifts, solid ice walls and boulder fields – including one that trapped the Top Gear team for several days.

Ultimately though, they were able to emerge from the far side of the boulder field, overcoming what many people had claimed was the main unconquerable obstacle that they would face along the way.

The limited edition 2014 Jeep Wrangler Polar was designed in honour of Antarctica’s driving conditions, equipping it more for a trip to the South Pole than the North Pole, but it’s still among the best suited to the challenges of a drive to the ‘top of the world’.

Its anti-spin rear differential and Dana 30 and 44 front and rear axles give it the best chance of finding traction on gravel, snow and ice alike, with heated front seats perfect for sub-zero conditions.

With 18-inch wheels, it’s likely that the Polar would need a few modifications too if it was seriously going to attempt a drive to the North Pole, but even so, it’s one of the few production cars designed to cope with extremes of cold.

Autonomous vehicles are one of the biggest developments in car technology at the moment – so could the Range Rover Sport be a contender for the first driverless convoy to reach the North Pole?

In the summer of 2016, Jaguar Land Rover unveiled their latest research on driverless technology, and while road cars are grabbing most of the headlines, it is the off-road capabilities of the specially equipped Range Rover Sport that could one day take it to the Pole.

The software not only controls individual vehicles on all terrain – crucially including snow – but can even link multiple vehicles in convoy, so one knows if the other has stopped for any reason.