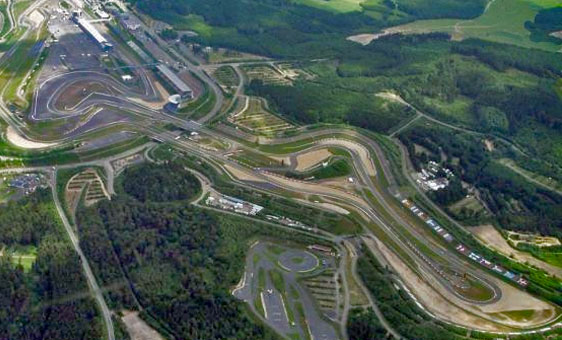 A round of applause for Roman Abramovich please, as this week the billionaire has given us one of the worst cases of car-envy we’ve ever known.

During a track day that most motorists could only ever dream of, the Chelsea FC owner revealed his multimillion pound collection of luxury supercars. The fleet features a whole host of famous marques, including entrants from Ferrari, Bugatti, Aston Martin and Mercedes.

How much would Abramovich’s astonishing collection cost?

It’s rumoured that the total combined cost of the cars is around a cool £8.5million – or so that’s the price tag some experts are putting on the line-up. It’s actually highly likely it could even be more than that – as one of the stars of the collection is a super sought-after Pagani Zonda R. This uber rare racetrack vehicle comes with a hefty price-tag of over £2.5million, as only 15 of these beauties have ever been produced.

The venue for the luxury unveiling was none other than Germany’s Nurburgring, where Roman rocked up with his enviable fleet. The famous race track is actually owned by his close friend and former business partner, Viktor Kharitonin, who had invited Roman and his supercars down for a day of fun and fast cars.

And the boys were obviously making the most of their billionaire privileges, as the track was closed to visitors, giving attendees at the two-day race event the privacy to thrash out a few test-drives and enjoy a race or two in private. Russian oligarch Kharitonin has owned the track since 2014.

First time the fleet has been seen in public

For car fans across the world, this reveal is a huge deal. Up until now, Abramovich’s incredible car collection has been kept pretty much under (vinyl) wraps, remaining largely unseen by the public. Now it’s out, it certainly didn’t disappoint – it’s a fleet rather fitting for one of the richest men in the world.

The line-up also included one of the fastest cars in the world the Bugatti Veyron, a Mercedes AMG GT3 and an Aston Martin Vulcan, a track-only model that’s famed for being Aston Martin’s ‘most intense and exhilarating creation to date.’

Another on display was the iconic Ferrari FXX, a prototype supercar, which is also owned by F1 driver Michael Schumacher. Back in 2009 Schumacher famously got behind the wheel of the FXX on British TV, driving it on an episode of Top Gear dressed as the Stig.

Tatiana Golovlyovo, an instructor at the prestigious track, said: “Usually track days are organised for the owner of the Nürburgring, Viktor Kharitonin. This is an exclusive event for the owner and his friends, nobody else apart from the staff and crew working for the event can enter the property.”

According to reports, the businessman, who is thought to be worth £8.6billion, spent the whole first day racing on the ‘Nordschleife’ (‘Northern Loop’), which is the longest section of the Nurburgring at 13 miles.

On the second day, the group spent their time on the much shorter GP Strecke, which is just 3.2 miles long. During the event the Russian moguls also tested the entire range of Porsche sports cars, as well as single-seated ‘Formula-BMW’ vehicles.

It’s certainly some car collection – and it must have cost him a fortune to ship it from Russia to Germany. Fortunately for Abramovich, we offer luxury car transport at surprisingly affordable prices. Our team treat these types of cars as if they were their own – with enough TLCC (that’s tender loving car care!) to go around even £8.5million’s worth!