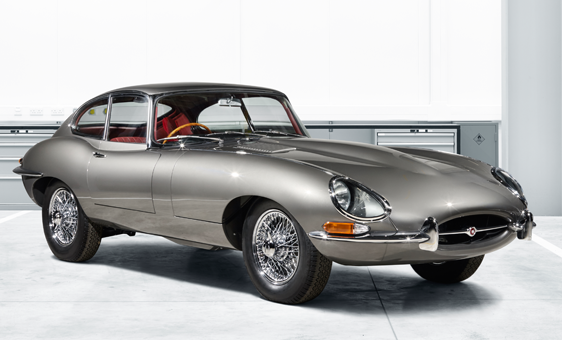 Jaguar Classic have revealed the first car to go through the E-Type Reborn scheme, which sees original E-Type Jags completely rebuilt and put up for sale at a price tag of £285,000 and upwards.

A total of ten cars are expected to be completed as part of E-Type Reborn, giving Jaguar enthusiasts the chance to own a piece of history that has been freshly built to modern-day standards.

The first elegant example is an Opalescent Gunmetal Grey Series 1 4.2 Fixed Head Coupe, which enjoyed a former life in California from 1965 until it went into storage in 1983 with 78,000 miles on the clock.

Jaguar Classic have rebuilt the original gearbox, engine and body shell, all with the original matching serial numbers, while reverse-engineered body panels that recreate the original appearance of the car have been used where necessary.

The attention to detail in refurbishing the vehicle even goes so far as to use the correct, contemporary kind of spot welding when replacing body panels, so nothing looks out of place.

“The E-Type is the most iconic sports car of all time, so we are delighted to be able to give new life to expertly selected examples for discerning customers around the world to own and enjoy.”

By request of the future owner, the vehicle can be rebuilt including some later modifications, such as Series 2 front brake callipers, or improved cooling using lightweight components.

Alternatively, these extra home comforts can be left out, so that the finished vehicle is as true as possible to its original 1960s Series 1 specification – maximising its future collectability.

Reconstruction work takes place at the Jaguar Land Rover Classic Works headquarters in Coventry, the city where the original E-Type was born over 50 years ago, and represents a homecoming for the chosen ten vehicles.

A total of 30 bays have been designated for work to be carried out, by expert craftsmen with a passion for breathing new life into one of the most celebrated models not only of the 1960s, but of the entire 20th century and beyond – a car Enzo Ferrari described as being the most beautiful ever made.

While the production run is strictly limited to just ten specimens, and the price tag of £285,000 or more will shut out some enthusiasts, the coming months will be an exciting time as Jaguar fans worldwide watch to see who gets the ‘golden ticket’ of owning an E-Type Reborn.

Some are likely to go straight into collections, transported via classic car carrier rather than running up any extra miles on their clock, but with any luck at least one will hit the roads so we can all get a glimpse of an original E-Type back at its best.