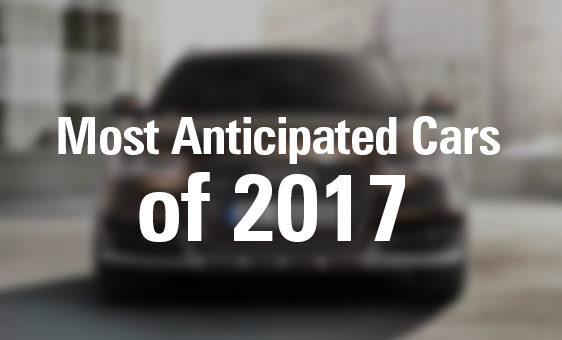 It’s been a rollercoaster of a year, and a fantastic one for the motoring world, with numerous remarkable models coming on to the market. Now, we can’t wait for 2017 as it looks to be even better.
Collectively, the world’s most prestige car manufacturers have a scheduled list of new releases that’s as long as your arm – but we’ve picked our top three to whet your automotive appetite and get you all revved up for the year ahead.

In the last year, Audi has debuted a trio of Prologue concept models at motor shows across the world. The teasingly good sneak previews have only served to get Audi fans everywhere hot under the collar, giving us an idea of what buyers might expect from the upcoming next generation Audi A6.

The third and final Prologue was the Audi Allroad that we saw at the Shanghai Motor Show back in April. Design-wise, we saw the usual robust, chuck ‘off-road’ look that’s normally associated with Audi’s high-riding estate – only this time, the model boasted sleek, smooth lines along the body.

What about under the bonnet? Nestled under the hood of the Prologue Allroad you’ll find a petrol-electric hybrid drive system. The German marque claims this will deliver a whopping 724bhp, which could potentially power the next RS6 Avant. A very exciting play from Audi indeed.

The second entrant on our top three just had to be from Maserati, but it might not be what you expected. As the long-running GranTurismo is due a revamp in 217, we wanted to put the spotlight on its sister model… The new 2+2 based on the Alfieri concept.

This car is based on a shortened version of the GranTurismo MC Stradale platform, but it’s a little smaller than the original – by about 24cm. It’s got the same engine, so expect the powerful punch that the 4.7-litre naturally aspirated V8 delivers.

Design-wise it has a dramatic look, clearly inspired by the early years and the classic ‘fifties-style’ Maserati models. It features a stylish, cutting-edge cabin with plenty of hi-tech kit and the team at Maserati have been explicitly clear in stating: “It’s a completely different proposition – the Alfieri is not a GT, it’s the perfect size 2+2 sports car that could complete the Maserati range.”

And now for the model that’s topped our list of the most hotly anticipated cars of 2017… This one might be a divider, but it’s definitely got the motoring world talking. After a near-20-year absence, Alpine will be brought back to showrooms by parent company Renault next year, with an all-new, jaw-droppingly good-looking sports car.

Looks-wise, we’ve got a sleek, diminutive body on our hands, which clearly takes inspiration from the old A110 sports car. It also incorporates a futuristic two-sweat interior design, that’s filled with high-tech gadgets and gorgeous styling.

We first saw the newcomer previewed by the Vision concept back in March at the Geneva Motor Show. Given the predicted price-tag of £50,000, rivals will include the likes of Porsche’s 718 Cayman… Proving the brand’s laudably lofty ambitions.

Much like the Porsche, the Alpine will get a four-cylinder turbocharged petrol engine mounted in the middle of the car.  From this, Renault have promised a rather underwhelming 250bhp. But while that might not sound like much, the car is expected to have a kerb weight of around 1,100kg – so it’s likely to fly. Bosses predict that it’ll be able to sprint from 0-62mph in just 4.5 seconds.

Full details won’t be released until the production version is unveilved next year, but things certainly look promising. It’s a wild car, but we love it – and that’s why it’s our most anticipated car of 2017 so far.

Got a car you’re anticipating you’ll need moving in 2017? Get in touch with the team to discuss our efficient, cost-effective car shipping service.