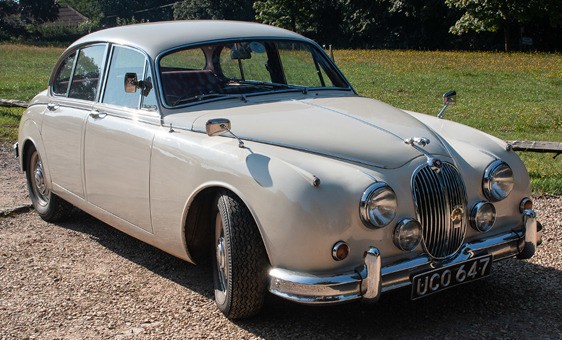 An upcoming auction highlights the importance of keeping miles off the clock of classic cars – something our collector car transporters can do by getting vintage vehicles from A to B without ever needing to turn on the engine.

This of course is useful for classic cars that are due to be sold as non-runners, but it’s also essential to maintaining the value of any older vehicles that have never clocked up more than their original delivery mileage.

On November 9th and 10th in Birmingham, Silverstone Auctions will be selling a number of collectible cars at the Lancaster Insurance Classic Motor Show, and mileage is a key selling point for several of the lots.

The first is a Jaguar Mk2 2.4 automatic from 1960. It’s in original condition and has had only four owners during its long history.

The low mileage and unrestored condition put the estimate for this lot at £15,000 to £18,000 and someone seems likely to get a new investment or collector’s piece on the day.

But it’s not the star of the show in terms of low mileage, as the next lot has covered even less ground under its own power – almost none at all, in fact.

The auction includes a 1989 Rover Mini 30 with a grand total of 24 miles on the clock – the distance it took to drive it to its first home.

At less than a mile a year, the pristine cherry red Mini was a commemorative edition at launch and is a true collector’s item now, especially as production was limited to just 2,000 vehicles in red and a further 1,000 in black.

Launched to mark 30 years of Mini, the car is now celebrating its own 30th birthday and is expected to sell for up to three times its original value, or more, again putting the estimate at £15,000 to £18,000.

Silverstone Auctions’ auction manager Harry Whale said: “The Mk2 Jaguars have been selling well and this is one of two we have on offer … and with the delivery mileage Mini we have a superb variety of high-quality cars with great stories to suit all budgets.”

Preserving the value of collectible cars

If you have a classic car – or you’ve just bought a brand new car you have tipped to be a future classic – it’s worth thinking about mileage if you ever need to relocate it.

Driving any car gradually depreciates its value with every additional mile on the clock, and there’s no legal way to reverse that.

But with Ontime’s collector car transporters, you can get your vehicle to where it needs to be, without adding so much as a single mile to its total.

All of our classic car transporters are equipped with lifting gear to make sure your vehicle can be loaded into the back without needing to turn the engine on, and without damaging the bodywork or paintwork either.