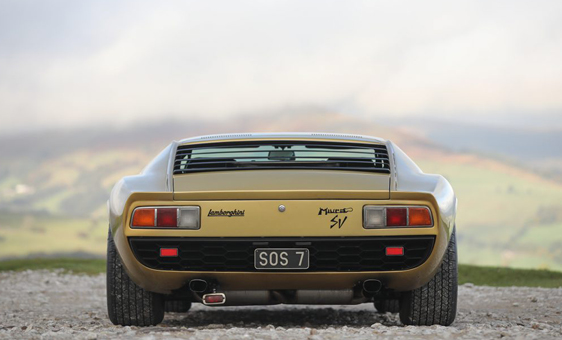 What does it take for a luxury car to smash its guide price at auction? The Hagerty Price Guide aims to estimate the value of rare and collectible cars that come up for sale – but sometimes even the experts are caught by surprise.

As we start a new year, Hagerty have revealed the biggest outperformers at luxury car auctions in 2020, so let’s take a look at the top five and see what helped them to sell way over estimate.

This 1961 Jaguar Mk II 3.8 was too sexy for its guide price, selling for £93,500 against a Hagerty Price Guide estimate of £69,800. It’s had one careful owner since 2011, and before that was owned by Right Said Fred’s Richard Fairbrass for five years. Just before that, in 2005, its original paintwork was lovingly restored – and there’s only 20,400 miles on the clock. All worthy of a 34% mark-up over the guide price.

The top five very quickly moves into eye-watering territory. The 1971 Lamborghini Miura P400 SV Speciale had an HPG price of £1.72 million when it went under the hammer in September. The auction house Gooding & Co called it “one of the most extraordinary Lamborghinis of all time” and the bidders agreed, driving the final selling price up to a touch over £3.2 million, a hefty 86% over estimate.

None of the top five comes from the 90s or since, but the 1989 Mercedes-Benz 300 SL sold by Historics Auctioneers in September comes the closest. As the most recent model on this list, it’s perhaps no surprise that its HPG estimate was quite low, at £28,500. This car really has had only one owner, with only 10,000 miles on the clock again, and that seems to be the magic number – helping it to a hammer price of just over £70,000, 146% more than predicted.

It’s not the highest priced car on this list, but the 1972 Bentley Corniche sold in July at Silverstone Auctions achieved the biggest multiple over its estimate. HPG predicted £62,100 and Silverstone estimated £80-90,000. The Bentley is one of only 43 right-hand drive examples, and was exhibited by invitation of the Duke of Richmond at Goodwood Festival of Speed’s centenary in 2019 – the invitation letter is included in the vehicle history documents. This provenance helped it to sell for £158,625, a whopping 155% over its HPG price, and the biggest mark-up of any luxury car auction in 2020.